My most senior colleague in the Department of Mathematics and Science at Pratt Institute, Marvin Charton, died on Thursday, April 12th. He was nearly 81 years old and had been a professor at Pratt Institute for over 56 years. Marvin was a renowned computational chemist who used correlation analysis to study chemical structure-property relationships, and his expertise in the field earned him election as a fellow of the American Association for the Advancement of Science. In 2005, the International Journal of Molecular Sciences dedicated a special issue to Marvin and his intellectual legacy; the issue included an excellent biographical tribute by John Shorter.

Marvin was known and appreciated by colleagues and students alike for his dry-but-sharp sense of humor. He formed strong bonds with his long-term colleagues, who consistently described him as a wonderful, generous man.

Marvin was well known for his catch phrases, which included:

“Another day, another molecule…” (Generally used to describe his approach to work, or as an answer to the question “What’s going on?”)

“Are you with me sports fans?” (Marvin’s way of asking his students if they followed a particular section of his lesson)

On Sunday, April 22nd, a very nice memorial service was held for Marvin at the Brooklyn Heights Synagogue. Present were Marvin’s family, friends, and a significant number of colleagues from Pratt. He was remembered as a man whose life was guided by his strong passions, which of course included chemistry but also extended to collecting antiquarian books and engaging in extended pun-generating sessions. We got to hear about Marvin’s many endearing quirks: that his cats had chemically significant names, that he was known by name at The Strand bookstore, and that he admired creatures commonly considered pests, such as cockroaches and ants. It was interesting to hear about Marvin from the perspective of his children and grandchildren, who highlighted more intimate family moments (such as vacations influenced by the location of chemistry meetings and the pursuit of antiquarian books) that seemed entirely consistent with the Marvin we all knew at Pratt.

If you would like to make a donation in memory of Marvin, his family requests that you support the Green Chemistry Education and Outreach program, which is an initiative of the American Chemical Society.

Below is a gallery of photos I have begun to collect of Marvin and his work. Please feel free to contact me if you have any pictures you wish to see posted: 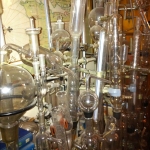 3 Comments to "Marvin Charton, Pratt professor and renowned computational chemist, is dead at 80"

I only just saw your blog today.
As a Chemistry alum (class of ’72), I was saddened to learn of Professor Charton’s passing last year. He certainly had a dry, sharp wit as mentioned by Prof. Jensen. My condolences to the Charton family and to his colleagues and students. Let me salute Prof. Charton by adding the most famous catch phrase with which he serenaded my Organic Chem classes: “Simple…Easy….Any number can play”.
Although he used this phrase mainly when discussing nucleophilic reaction mechanisms and/or Hammett equation calculations, he also extrapolated it to other aspects of life. To this day, I often entertain (or torture) my wife with this phrase. A belated Rest in peace to a very fine man.

I wanted to thank you for this as I only found it today when I decided to search him. Marvin Charton was a renowned chemist and my favorite grandpa. When my sisters and I got to his apartment he always said to me “Hello beautiful child.” He kept drawings given to him from his students, framed on his bedroom wall. I will always remember the shuffle he had when he walked as I got older and him once telling me “there is no such thing as a stupid question.”
He was not only a smart man but a loving man who loved chocolate. Sometimes it feels like it’s not fair that he’s gone, all the things he’ll never see his granddaughters do, but it makes me so happy and proud that he shared his humor and truly shared his knowledge of chemistry with his students.

[…] I going with this?  I didn’t have a typical Jewish upbringing in the United States.  My father, Marvin Charton, was a Chemistry professor at Pratt Institute in Brooklyn, New York.  His research gained him […]