Somehow our brains process a myriad of ideas, attempting to make connections between these ideas. I think that it is safe to say that modern neuroscience still has little understanding of how the brain maintains these connections, but what we do know is that the networked structure of the brain seems ideal for dealing with complex information that does not always interconnect in a simple, linear fashion. I am always amazed by the way my ‘train of thought’ can amble from topic to topic, covering large conceptual distances by traveling between related ideas. Unfortunately, this meandering walk is about as good as my brain does most of the time.

Somewhere in my head is a larger picture, a map of all the things I understand and how they relate, but gaining access to this map and all of its connections is not that easy. If only I could get all of my ideas to form into a coherent picture, I would be able to better plan research projects, lectures, and written work. Concept maps offer a means by which just such a picture can be composed. Concept mapping — also sometimes called “mind mapping” — is the process of creating a visual network of inter-related ideas.

Concept maps can be constructed in a variety of ways, although the conventional way of making them involves connecting boxes representing concepts together with arrows representing relationships. The key attribute of a good concept map is that it creates a valuable ‘geography of ideas’, using space to make the inter-relationships of various ideas more clear to the viewer. One does not look at a concept map as a whole; rather, good concept maps allow the viewer to ‘walk the landscape of ideas’, focusing on a single concept and then following a path that traces connections to related ideas. This walking across the landscape of ideas eventually allows the viewer to gain an understanding of the overall topography of the concept map, yielding more broad and synthetic understanding.

The easiest way to make a concept map is to use a large piece of poster paper or classroom board: just start drawing out ideas and making connections between them. However, the quick start-up and initial fluidity of this approach trades off with what I view as the ultimate goal of concept mapping: to produce a complex map that is well-organized and easy to read. Just as word processors make it much easier to free-compose, edit, and store written prose, concept mapping software allows much greater flexibility in developing a nice map. The critical connections between ideas can be maintained on the map even as it undergoes radical geographical restructuring, and one need not re-draw the map from scratch every time it is subject to major rearrangements or additions.

One of the biggest downsides to concept mapping on the computer is that most monitors are too small to really allow for full visualization of the map on a single screen, although using larger and/or multiple screens begins to fix this problem. Ultimately, large-scale plots of computer-developed maps are probably the best way of displaying concept maps, although high-resolution PDF’s can also be valuable. My favorite software for concept mapping is the Visual Understanding Environment (VUE), a free package produced by researchers at Tufts University that works on Mac OS X, a variety of Windows versions, and Linux. VUE is very easy to use but also contains a lot of advanced features (many of which I have yet to explore).

So far, I have used concept maps to plan talks, lectures, and course content. I have also experimented with using concept maps to plan and organize research projects. Eventually I would like to maintain comprehensive concept maps representing the content presented in each of my courses. Below is a sample of some concept maps I have created for a variety projects (you can download either a PDF or a VUE file):

I have also started to incorporate concept mapping into my classes, mainly as an exercise empowering students to better organize their ideas before embarking on a major research, creative, or written projects. Concept mapping is now integrated into my Great Adventures in Evolution, Evolution of Sex, and Evolution of Cooperation courses.

Massimo Pigliucci [1, 2, 3] inspired me to start thinking about concept mapping in lectures he gave at Stony Brook University. His writing and lectures demonstrate the kind of coherent understanding and explanation that I hope to produce with my own concept maps.

You can see all of my blog posts related to concept mapping here.

Below is a gallery of some of the concept maps I have made for my teaching and research: 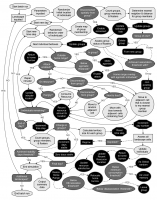