To better understand where predator-prey systems are and are not stable, I performed probabilistic simulations where components of different predation models were used to generate the probability of three different possible events:

I ran replicate simulations at each combination of parameter values, with each simulation producing one of three possible outcomes:

Replication introduced the possibility that not all simulation runs at the same combination of parameter values would produce the same outcomes. To display the percentage of simulation runs which produced each of the three possible outcomes, I used the RGB color system to display the percentage of predator extinctions (red), dual extinctions (blue), and stable coexistences (green). As the key below shows, you can show what percentage of any three outcomes were produced by proportionally combining the red, green, and blue color channels: 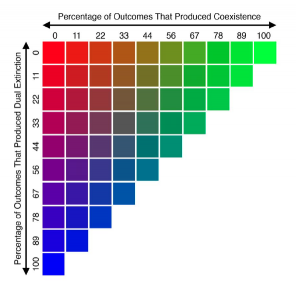 This color system allowed me to show the outcomes of the simulations across two-dimensional parameter space. Below is the parameter space for the Hassell-Varley-Holling model where prey growth rate (r) and the interference parameter (m) are varied:

In the Beddington-DeAngelis model of predation, dual extinction can only occur when predator interference is very low. This suggests that predators with high levels of interference should not experience ecological exclusion, a prediction at odds with the Hassell-Varley-Holling model that has important evolutionary implications. This work suggests that in order to understand the potential for ecological exclusion in a particular predator-prey system, we first need to have an accurate assessment of:

I think that it is fascinating (if not all that surprising) that such an accurate understanding of an ecological interaction is required to understand how evolution shapes interacting species.

Header images on this page courtesy of Wikimedia Commons. Click on the images to see their exact source.